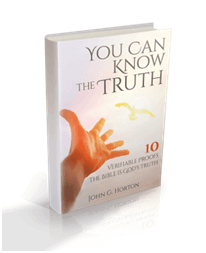 “Old Testament archaeology has rediscovered whole nations, resurrected important peoples, and in a most astonishing manner filled in historical gaps, adding immeasurably to the knowledge of Biblical backgrounds.”

“There can be no doubt that archaeology confirmed the substantial historicity of the Old Testament. Discovery after discovery has established the accuracy of innumerable details, and brought increased recognition to the value of the Bible as a source of history”

“It is to the credit of W.F. Albright that much of his scholarly endeavor has been directed toward rehabilitating the reputation of the Old Testament as a reliable record of the past. In numerous booksand articles he has shown again and again that the Biblical record has been vindicated against its critics by recent archeological discovery”

“I know of no finding in archaeology that’s properly confirmed which is in opposition to the Scriptures. The Bible is the most accurate history text book the world has ever seen.”

There is no known Instance of Archaeology proving the Bible wrong.

“Archaeology has confirmed countless passages which have been rejected by critics as unhistorical or contradictory to known facts……Yet archaeological discoveries have shown that these critical charges…..are wrong and that the Bible is trustworthy in the very statements which have been set aside as untrustworthy….. We do not know of any cases where the Bible has been proved wrong.”

No artifact disproves a single theological doctrine in the Bible

“The reader may rest assured that nothing has been found [by archaeologists] to disturb a reasonable faith, and nothing has been discovered which can disprove a single theological doctrine. We no longer trouble ourselves with attempts to ‘harmonize’ religion and science, orto ‘prove’ the Bible. The Bible can stand for itself.” –

If men do not acknowledge God, the very stones will cry out

“Blessed is the king who comes in the name of the Lord!”[a]“Peace in heaven and glory in the highest!”39 Some of the Pharisees in the crowd said to Jesus, “Teacher, rebuke your disciples!”40 “I tell you,” he replied, “if they keep quiet, the stones will cry out.”
[Jesus] – Luke 19:38-40

“I’ve been accused of teaching the absolute divine inspiration of the Scripture. I want it to be understood that I have never taught this. All I have ever said is that in all of my archeological investigation I have never found one artifact of antiquity that contradicts any statement of the Word of God.”

Nelson Glueck, President of the Jewish Theological Seminary in the Hebrew Union College; Considered one of greatest archaeologists ever:

The book of Daniel’s claims that Belshazzar was the King of Babylon and that King Nabonidus reigned on the Babylonian throne at the time of the Medo-Persian conquest of Babylon. While excavating ancient Ur, an inscription stated that Nabonidus passed the throne and royal title to his eldest son, “Bel-shar-usur.”

Supports the Daniel 5:29 promise of the “third” place in the kingdom, implying that Belshazzar was only second in authority. Daniel’s accounts of Belshazzar, once dismissed by detractors, were later proved completely reliable.

These ancient Biblical sites are repeatedly referenced in Scripture and their excavations, without exception, affirm the Old Testament historical narrative. Prior to their twentieth century excavations, almost all were labeled as ‘fables’ by Bible detractors

The walls of Jericho

During excavations of Jericho, Professor Garstang found an incredible confirmation of the biblical record about the conquest of Jericho. As verified by archaeologists: “There remains no doubt: the walls fell outwards so completely that the attackers would be able to clamber up and over their ruins into the city.” All other archeological digs in that time and area reveal the walls of cities always fall inwards, as invading armies push their way into a city.

Joshua 6:20, states, “the wall fell down flat, so that the people went up into the city every man straight ahead, and they took the city.”

Joshua, Numbers, Deuteronomy, Kings, 2 Samuel, Chronicles. According to Grant Jeffries, ‘The Signature of God’ (2015), “Only the supernatural power of God could have caused the walls to fall outward as described in Joshua’s account of the conquest of Jericho”

During the First Jewish Revolt against Rome (66–70 CE), which ended with the destruction of the Temple, Jews minted their own coins dated to the first, second, third,fourth and more rarely, fifth year of the revolt. Dating began with the beginning of the revolt. Many of the coins also bore legends like “Jerusalem the Holy” or “Freedom of Zion.”

The Romans crushed the Jewish revolt in 70 AD (except for the holdouts at Masada, among other places),but the Jews managed to revolt again a little more than 60 years later. This revolt, the so-called Bar-Kokhba Revolt (132–135 AD), lasted only two-and-a-half years. Coins from this revolt are much rarer. As in the first revolt,coins are dated beginning with the start of the revolt. An example is a coin inscribed, “Year 1 of the Redemption of Israel,” or another inscribed, “Year2 of the Freedom of Israel.” Rarely, a coin will bear the legend “Year 3 of the Redemption of Israel.”

(50 AD) wrote concerning Nero:“Hence to suppress the rumor, he falsely charged with the guilt, and punished with the most exquisite tortures, the persons commonly called Christians,who were hated for their enormities. Christ us, the founder of the name, was put to death by Point us Pilate, procurator of Judea in the reign of Tiberius:but the pernicious superstition, repressed for a time broke out again, not only through Judea, where the mischief originated, but through the city of Romeal so” (Josephus, Annals XV .44).

Affirms the death of Christ and persecution of Christians outside of Scripture .

The Cylinder of Cyrus the Great.

2 Chronicles 36:23 and Ezra 1 report that Cyrus the Great of Persia, after conquering Babylon, permitted Jews in the Babylonian Captivity to return to their homeland as prophesied by Isaiah (Isa. 44:28). This tolerant policy by the ruler of the Persian Empire is borne out by the discovery of a nine-inch clay cylinder found at Babylon from the time of its conquest, 539 BC. It reports Cyrus’ victory and subsequent policy of permitting Babylonian captives to return to their homes and even rebuild their temples. — The list of correlations between Old Testament texts and the hard evidence of Near Eastern archaeology is extensive. When it comes to the inter-Testament and New Testament eras, the number of positive correlations is unparalleled.

Strongly supports the date and details of Biblical accounts of the conquest of Israel by Babylon and the subsequent rise of Cyrus and return of the Israelites to Israel.

Archaeologists digging east of Ankara, Turkey, discovered the ruins of Hattus as, the ancient Hittite capitol at what is today called Boghazkoy, along with a vast collection of Hittite historical records showing a flourishing Hittite empire around 1500 BC.

For years historians claimed that the Bible was in error because they could find no traces of the “Hittite” civilization referenced over sixty times in the Bible. Today, there is abundant archaeological evidence to support an advanced Hittite civilization that once vied with Assyria and Egypt for power in the ancient world. The discovery of the Hittite civilization is another example of claiming Bible error before all the facts are in! (Today, one can even get a doctorate in Hittite studies at the University of Chicago).

Genesis; 100 101 Exodus, Deuteronomy, Joshua, Judges, Kings, Chronicles, Nehemiah, Ezra Genesis 23, 25:9, 49:30, 50:13, reports that Abraham buried Sarah in the Cave of Machpelah, which he purchased from Ephron the Hittite. 2 Samuel 11 tells of David’s adultery with Bathsheba, the wife of Uriah the Hittite.