Forty Scripture writers over 1,500-years unwaveringly affirmed God’s divine inspiration of Scripture over 5,000 times! Credible claims are supported by hundreds of first-hand, eye-witnessed miracles and other proofs of God’s inspiration. God, Christ, the prophets and apostles never disputed a single verse of Scripture or expressed any concern mankind might change or ”un-inspire” Scripture. God continues to speak to His people today, just as he did thousands of years ago.

Click Here to Read Entire Section of Claims of Inspiration

“Miracles are a retelling in small letters of the very same story which is written across the whole world in letters too large for some of us to see.”
–C.S. Lewis – Christian Author

All Scripture is inspired by God

“All Scripture is God-breathed and is useful for teaching, rebuking, correctingand training in righteousness, 17so that the servant of God may bethoroughly equipped for every good work.”
2 Timothy 3:16-17 – NIV

Nothing less than the whole Bible can make a whole Christian

“The Word of God well understood and religiously obeyed is theshortest route to spiritual perfection. And we must not select a fewfavorite passages to the exclusion of others. Nothing less than a wholeBible can make a whole Christian.”
A. W. Tozer –Theologian, Author, Bible Scholar, Teacher

Christ did not embrace all religions and beliefs

“The Christian message is not an inclusive message that embracesall religions; it’s not a message that there are many paths to the sameplace. The Christian message is summed up in the brave words ofPeter before the Sanhedrin: “Jesus is ‘the stone you builders rejected,which has become the cornerstone.’ Salvation is found in no one else,
for there is no other name under heaven given to mankind by whichwe must be saved” (Acts 4:11–12).”
Michael Youssef –Christian Author

Bible Inspiration comes from God, not men or churches

“The Church no more gave us the New Testament canon than IsaacNewton gave us the force of gravity.” –
J.I. Packer–Theologian, Author; Bible Scholar

The Bible is inspired by God

“I have a fundamental belief in the Bible as the Word of God, written by those who were inspired. I study the Bible daily.”
Sir Isaac Newton–Scientist – Physicist, Inventor – 1642-1727

“A transformed life is the greatest of all miracles. Every time a person is “born again” by repentance of sin and faith in Jesus Christ, the miracle of regeneration is performed”
Billy Graham –Evangelist, Theologian, Author, Teacher / Writer

“The mind of God is greater than all the minds of men, so let all menleave the Gospel just as God has delivered it unto us
Charles Spurgeon –Theologian, Author, Bible Scholar (1834-1892)

“We also have the prophetic message as something completely reliable, and you will do well to pay attention to it, as to a light shining in a dark place, until the day dawns and the morning star rises in your hearts. 20 Above all, you must understand that no prophecy of Scripture came about by theprophet’s own interpretation of things. 21 For prophecy never had its origin in the human will, but prophets, though human, spoke from God as they were carried along by the Holy Spirit.”
2 Peter 1:19-21 – NIV

“This book had to be written by one of three people: good men, bad men or God. It couldn’t have been written by good men because they said it was inspired by the revelation of God. Good men don’t lie and deceive. It couldn’t have been written by bad men because bad men would not write something that would condemn themselves. It leaves only one conclusion. It was given by divine inspiration of God.”

Forty Bible writers unequivocally stated 5,000 times over 1,500-years: “God said,” “God has spoken,” “This is the Word of the Lord” and other inspiration-affirming truths. These honest, intelligent, ethical God seekers knew they were directly quoting the very words, instructions and teachings of Almighty God! Further, they clearly distinguished their own words fromGod’s Words – and never casually attributed words to God. The Bible’s claims of God’s direct inspiration are unprecedented and unparalleled in any other writing, including the “holy books” of other religions.

Over 5,000 Direct Claims of God’s divine inspiration in Scripture by 40 writers over 1500-years 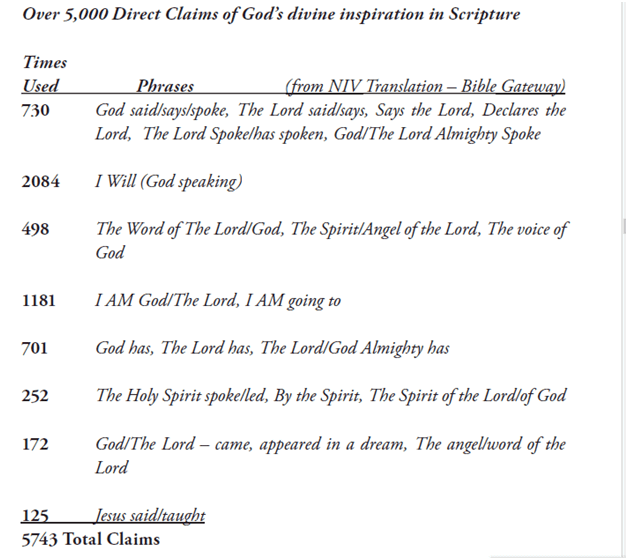 From beginning to end, Scripture/the Bible is punctuated by amazing miracles witnessed by many. Scripture’s incredible, first-hand collection of ancient, eye-witnessed miracles and testimonies is unmatched by religious or secular writings. These amazing miracles affirm God’s supernatural intervention. They are accepted by those who are led by the Spirit, but hidden from those whose self-inflicted Spiritual blindness and deafness renders them unable tosee or hear. For believers, miracles are observable, supernatural events which glorify God. For non-believers, there is only sometimes inexplicable but random natural coincidences without boundaries or Scriptural consistency. Like the inspiration of Scripture, miracles depend entirely on God, not human belief, approval or agreement. If God exists, so do His miracles and inspired Scripture.

God has always spoken to His people and does so today

Some think it odd or amazing when Christians claim God has spoken to them. But, even more inexplicable would be a God who did not communicate with the people He created and loves.

In Old Testament times, God directly spoke Scripture to selected prophets. In New Testament times, God has communicated through the teachings and life of Jesus Christ. Following the death and resurrection of Jesus Christ, God sent His indwelling Holy Spirit to “born again” believers in Jesus Christ. The Holy Spirit is God working in and speaking to believers (#9 Holy Spirit). The Hoy Spirit never contradicts Scripture or the teachings of Christ, but sheds light onGod’s revealed ways , truths, plans, purposes and promises for mankind in Scripture.

The magnitude of Scripture’s claims of God’s direct, divine inspiration far exceeds vague generalities or a few isolated Bible verses. There is nothing obscure, interpreted, inferred or imagined about 5,000 verifiably quantifiable claims of inspiration by Bible writers.