Unparalleled literary evidence affirms Scripture is intact and unchanged. We have available to us over 24,000 ancient manuscript copies (including the Dead Sea Scrolls), recorded over 1,500-years. Each demonstrates the meticulously accurate reproduction and preservation of Scripture. Today, six-billion copies of 2,000 to 3,000-year old Scriptures, in 2,000 languages,(plus countless digital copies), ensure the Bible will never be swept aside or destroyed.

“The Jews preserved Scripture as no other manuscript has ever been preserved. With their massora they kept tabs on every letter, syllable, word and paragraph. They had special classes of men within their culture whose sole duty was to preserve and transmit these documentswith practically perfect fidelity scribes, lawyers, massorettes.” [[Massora: A collection of critical and explanatory notes on the Hebrew text of the Old Testament, compiled from the 7th to 10th centuries]
Bernard L. Ramm (1916 – 1992), Theologian, Evangelist, Apologist, Author

“Though textual criticism cannot yet produce certainty about the exact wording of the original, this uncertainty affects only about two percent of the text. And in that two percent support always exists for what the original said—never is one left with mere conjecture. In other wordsit is not that only 90 percent of the original text exists in the extant Greek manuscripts—rather, 110 percent exists. Textual criticism is not involved in reinventing the original; it is involved in discarding the spurious, in burning the dross to get to the gold.”

Christ’s Words will never pass away

Heaven and earth will pass away, but my words will never pass away.
Jesus – Matthew 24:35 – NIV

The Bible was handed down – as it was written

“The interval between original composition [of the N.T.] and the earliest extant evidence becomes so small as to be negligible and the foundation for any doubt that the Scriptures have come down to us substantially as they were written has now been removed; both theauthenticity and the general integrity of the books of the New Testament may be firmly established.”

“The quantity of New Testament material is almost embarrassing

in comparison with other works of antiquity. Next to the New Testament, the greatest amount of manuscript testimony is of Homer’s Iliad, which was the bible of the ancient Greeks. There are less than 650 Greek manuscripts of it today. Some are quite fragmentary. They come down to us from the second and third century A.D. And following. When you consider that Homer composed his epic about 800 B.C., you can see there’s a very lengthy gap. There was in fact no comparison: the manuscript evidence for the New Testament was overwhelming when juxtaposed against other revered writings of antiquity-works that modern scholars have absolutely no reluctance treating as authentic.”

A complete manuscript of the Book of Isaiah dating from 200 BC was found among the Dead Sea scrolls. Isaiah’s original autograph was written about 800 to 700 BC. The Dead Sea discovery pre-dated the previous earliest known Hebrew copies of Isaiah by almost one thousand years! Years of painstaking comparison have led scholars to conclude that the differences between the Qumran scrolls and Scriptures penned one thousand years later comprised only incidental spelling differences and margin-note variations!

Every attempt to belittle the Bible is a crime against humanity

“The existence of the Bible, as a book for the people, is the greatest benefit which the human race has ever experienced. Every attempt to belittle it is a crime against humanity.”
Immanuel Kant—Philosopher; 1724 – 1804), Considered central figure of modern philosophy

The Bible is far more than just a piece of literature

You Christians look after a document containing enough dynamite to blow all civilization to pieces, turn the world upside down and bring peace to a battle-torn planet. But you treat it as though it is nothing more than a piece of literature.

“Because of the increase of wickedness, the love of most will grow cold, 13 but the one who stands firm to the end will be saved. 14 And this gospel of the kingdom will be preached in the whole world as a testimony to all nations, and then the end will come.”
Jesus – Matthew 24:12-14

“The Dead Sea Scrolls proved to be word for word identical with our standard Hebrew Bible in more than and ninety-five-percent of the text. The five-percent variation consisted chiefly of obvious slips of the pen and variations in spelling. No variations changed the meaning of the text in any significant way. The fact that both Old and New Testament texts have been transmitted so accurately over so many years is miraculous.”

Gleason Archer, Harvard PhD;
One of most prominent archaeologists of the twentieth century

The New Testament literary record is unparalleled and unprecedented

The original New Testament autographs were produced within seventy years of Christ’s resurrection. Twenty-four thousand manuscripts including six thousand in Greek and nineteen thousand in Syriac, Latin, Coptic, and Aramaic were recorded within the first few centuries. Within 150 years of Christ’s earthly life, the Scriptures which constitute our Bible today were in place and in widespread use. The New Testament literary record is unparalleled and unprecedented among ancient writings. All but eleven verses of the entire New Testament were quoted in the writings of the second century church fathers, so that the entire New Testament could have been reconstructed from those writings.

After thousands of years, the Bible is still the most widely quoted literature in history, often without intent or realization. Scripture has influenced language, culture, laws, medicine, history, and daily life more than any other literature, truth, or doctrine. Even our daily language is influenced in ways most do not realize. Over twenty-two thousand English words are rooted in Hebrew, far exceeding Greek, Latin, and French! In his book Begat, linguist David Crystal identified 257 English language phrases directly from the King James translation of the Bible.

The comparative survival of thousands of Scripture manuscripts is inexplicable

In a far distant second to Scripture’s twenty-four thousand surviving manuscript copies is Homer’s Iliad, with a mere 640 manuscript copies, all of which were produced over five hundred years after the original autograph! The comparative survival of thousands of Scripture manuscripts is simply inexplicable. 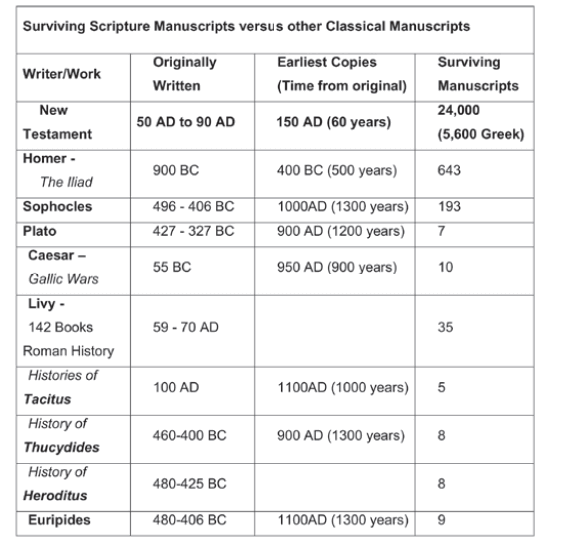 The Dead Sea scrolls include

The Dead Sea Scrolls are the oldest group of Old Testament manuscripts ever found. Scholars have discovered the remains of about 825 to 870 separate scrolls. The Scrolls were mostly written in Hebrew but also include Greek and Aramaic. Aramaic was the common language of the Jews of Palestine between 200 BC and 200 AD.

The Dead Sea Scrolls are so extensive that they serve almost as a Rosetta Stone, greatly enhancing modern knowledge of these ancient languages. – The age and breadth of the Dead Sea Scrolls have allowed Bible scholars to draw many incontrovertible conclusions about the reliability and accuracy of Scripture: The Bible as we know it today has remained virtually unchanged for at least two to three-thousand years. (Claims of changes or errors introduced into Scripture lack both substance and truth).

The Bible remains the world’s most widely published, best-selling book in history. Guinness World Records estimates 2.5 billion Bibles were printed between 1815 and 1975. The Economist estimates 100 million new Bibles are printed every year (four billion since 1975), for a staggering total of five to six billion Bibles printed in over twenty-two hundred languages. The Gideon’s International Organization alone has distributed over two billion Bibles and agrees with the six billion number. The “2014 United Bible Societies Scripture Report” claims Bible societies distributed 428.2 million scriptures in 2014. This also supports the six billion number, which is roughly one copy of the Bible for every person on earth, or thirty million Bibles per year for two hundred years!